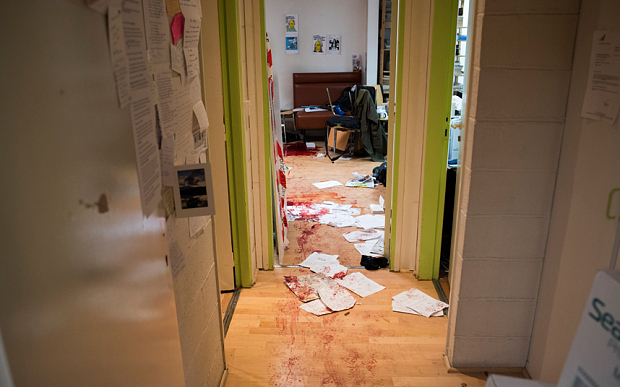 Inside the Charlie Hebdo offices following the attack.

The Charlie Hebdo office previously received threats as a result of offensive content and was firebombed in 2011 after naming the Prophet Muhammad the publication’s Editor-in-Chief.

After the shooting, the gunmen escaped in a black vehicle to a Paris suburb where they hijacked another vehicle. According to French journalist Elijah Magnier, one of the Kouachi brothers left his ID card in the abandoned vehicle.

The French anti-terrorism unit was mobilized to search for the brothers, both of whom are French citizens. In Picardy, the brothers allegedly robbed a service station for petrol and food. On Thursday, a police helicopter spotted what they believed to be suspects heading into a forest on foot in Crepy-en-Valois, in northern France.

One suspect, eighteen-year-old Hamyd Mourad, handed himself in to authorities late on Wednesday. He was later absolved, as he was in school at the time of the shooting and had no ties to the attack. Mourad was released without charges on Jan 9.

A lawyer for Charlie Hebdo reported on Thursday that Stephane Charbonnier, Jean Cabut, Georges Wolinski, and Bernard Verlhac were the four cartoonists shot dead by the gunmen. In an interview with Le Monde, Charbonnier had said, “I would rather die standing than to live on my knees,” a sentiment that has been echoed in light of the attacks as people both mourn the dead and advocate free speech. 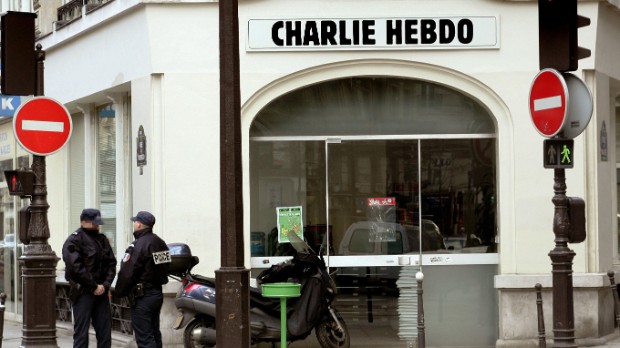 In solidarity with Charlie Hebdo, people have been using the slogan “Je suis Charlie,” meaning I am Charlie, accompanied by the hashtag “#jesuischarlie” trending on social media. A vigil was held in Paris to mourn the dead. The UN held a moment of silence for the victims of the attack and condemned the shooting as a “barbaric and cowardly terrorist attack.”

People in the Bay Area have shown similar signs of support, as a vigil was held at the French Consulate in San Francisco to commemorate the dead.

While most displays of solidarity have been peaceful, the shooting was followed by increased violence against Muslims in Paris. Although no official reports have been made, many reportings of attacks on mosques have popped up on social media since the attack.