In a horrifying and tragic turn of fate, basketball legend Kobe Bryant and his 13-year-old daughter Gianna Bryant died in a helicopter crash on Sunday, Jan. 26. The helicopter was carrying nine passengers when it crashed after encountering fog amid the hills of Calabasas, CA. Bryant was on his way to Gianna’s basketball game, and chose to travel via helicopter to avoid Los Angeles traffic.

Officials remove a body from the wreckage in Calabasas on Sunday where Kobe Bryant and his daughter Gianna were among 9 dead in a helicopter crash. (Christina House / Los Angeles Times/TNS)

Throughout his life, Bryant prided himself on being different. The son of former professional basketball player Joe Bryant, he spent his early years in Italy while his father played professionally in Europe. After returning to the United States, Bryant played high school basketball for Lower Merion High School, winning multiple awards, including the Gatorade Men’s National Basketball Player of the Year and the Naismith High School Player of the Year. Despite interest from some of the most elite basketball colleges in the country – including Duke, Villanova, Michigan, and North Carolina – Bryant decided to become the fifth player in history to enter the NBA Draft directly out of high school. Kobe went on to become the thirteenth player selected in the 1996 draft, going to the Charlotte Hornets. The Hornets then traded him to the Lakers for center Vlade Divac, and Bryant spent the next 20 years in Los Angeles.

Early in his career, Bryant paired with Shaquille O’Neal, forming one of the best superstar duos in NBA history. Together, they won three straight NBA championships from 2000-2002, and appeared in another, losing to the Detroit Pistons in 2004. However, personal disagreements between the two, in addition to O’Neal’s demands regarding his next contract, led the Lakers to trade Shaq to the Miami Heat, leaving Bryant as the team’s undisputed leader. Bryant certainly stepped up to fill the void, as he led the league in scoring from 2005 to 2007. During this time period, Bryant played one of the most remarkable games in his career, scoring 81 points – the second most in a game in NBA history – against the Toronto Raptors on Jan. 22, 2006. 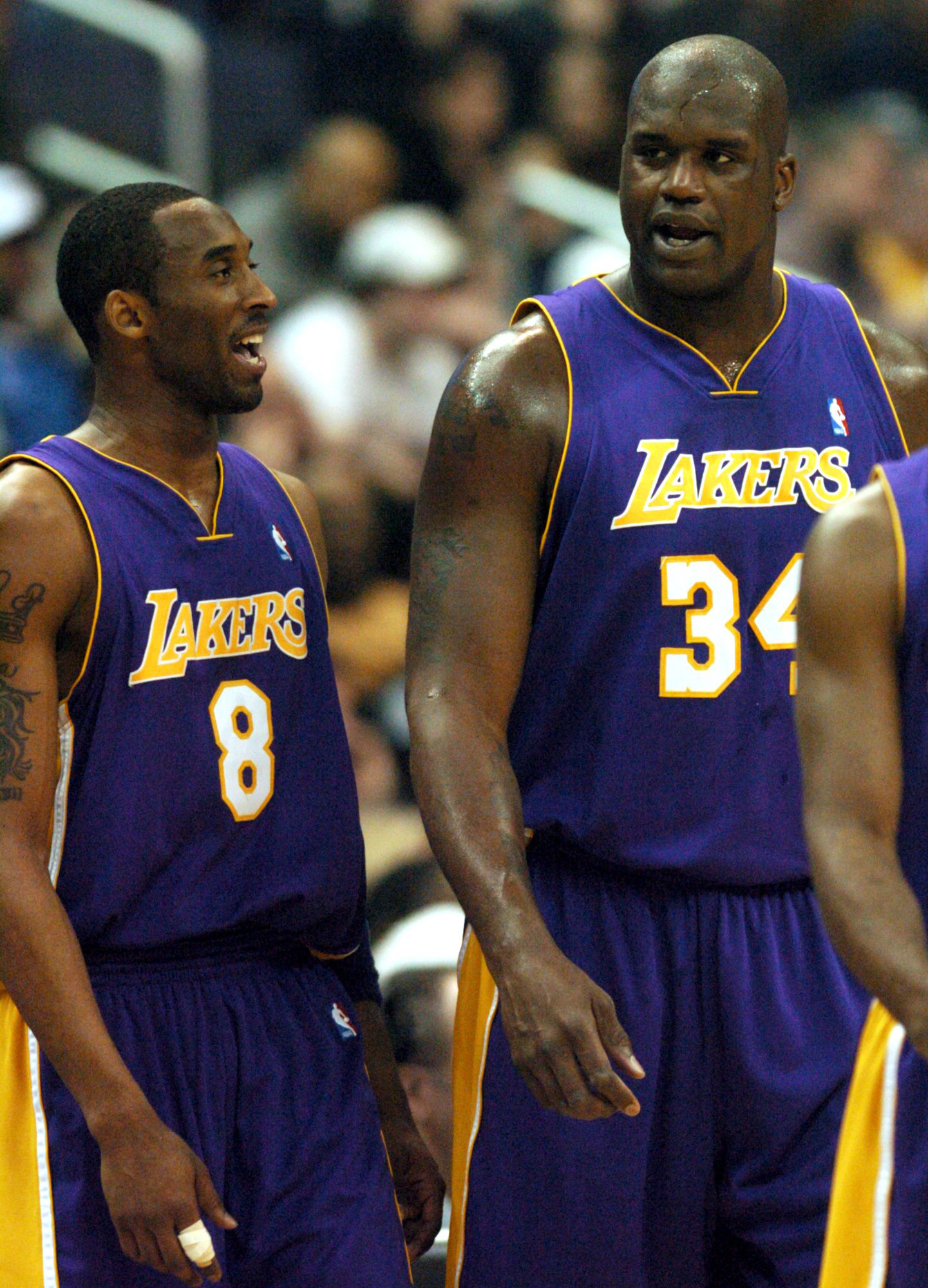 In 2008, after the Lakers traded for Pau Gasol, Bryant led the team to three straight finals, winning two of them, and earning himself the title of Most Valuable Player (MVP) of the finals during each of the team’s victories in 2009 and 2010. While he remained effective after 2010, the Lakers struggled to match their previous successes, and after tearing his Achilles tendon in 2013, Bryant’s next two seasons were marred by injuries. In 2015, Bryant announced he would retire after the season, and in his final game, he scored 60 points, by far the most of any player in a farewell game in league history. 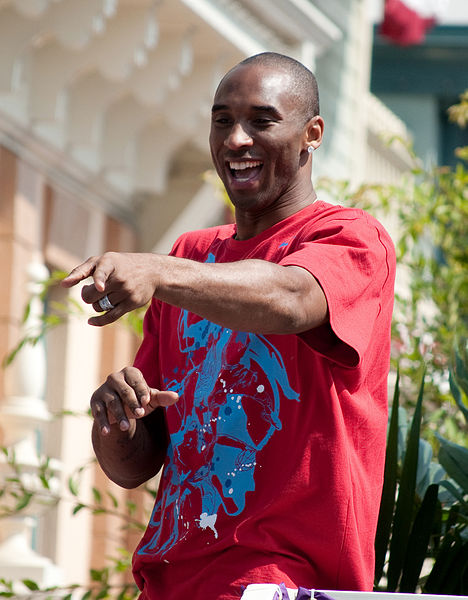 Throughout his career, Bryant was known for his hard work, and he often questioned teammates who didn’t seem to care as much as he did about winning. In fact, Bryant’s famous feud with O’Neal was largely centered around O’Neal’s work ethic. He was also driven by his quest to best NBA great Michael Jordan, whom Bryant modeled his game after. He was universally beloved among his peers, including those on the USA Olympic basketball team, on which Bryant won two gold medals. 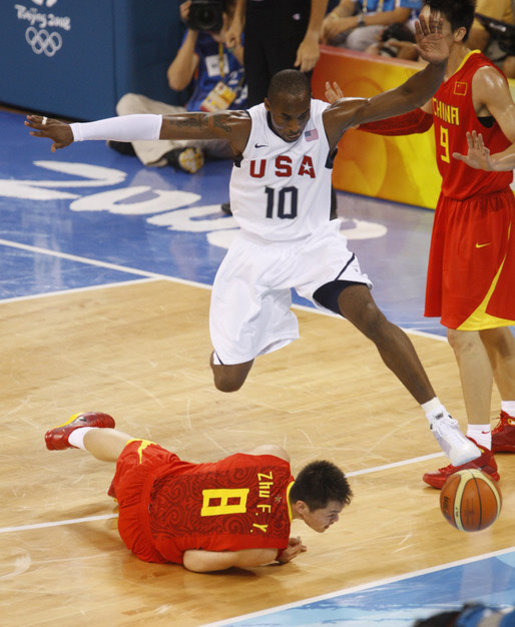 Beyond his achievements in basketball, Bryant made a lasting impact on the world. A father of four girls, Bryant was known as a dedicated husband and father. Gianna, who perished alongside Bryant in the helicopter, also played basketball, and aspired one day to play for the University of Connecticut Huskies and, eventually, the WNBA. Bryant was also involved in the media, as he created the popular series Detail on ESPN, in which he broke down the nuances of basketball by analyzing game film for viewers. He even managed to win an Academy Award for Best Animated Short Film for his film, Dear Basketball, a love letter from Kobe to basketball; he was the first African-American to win the award. 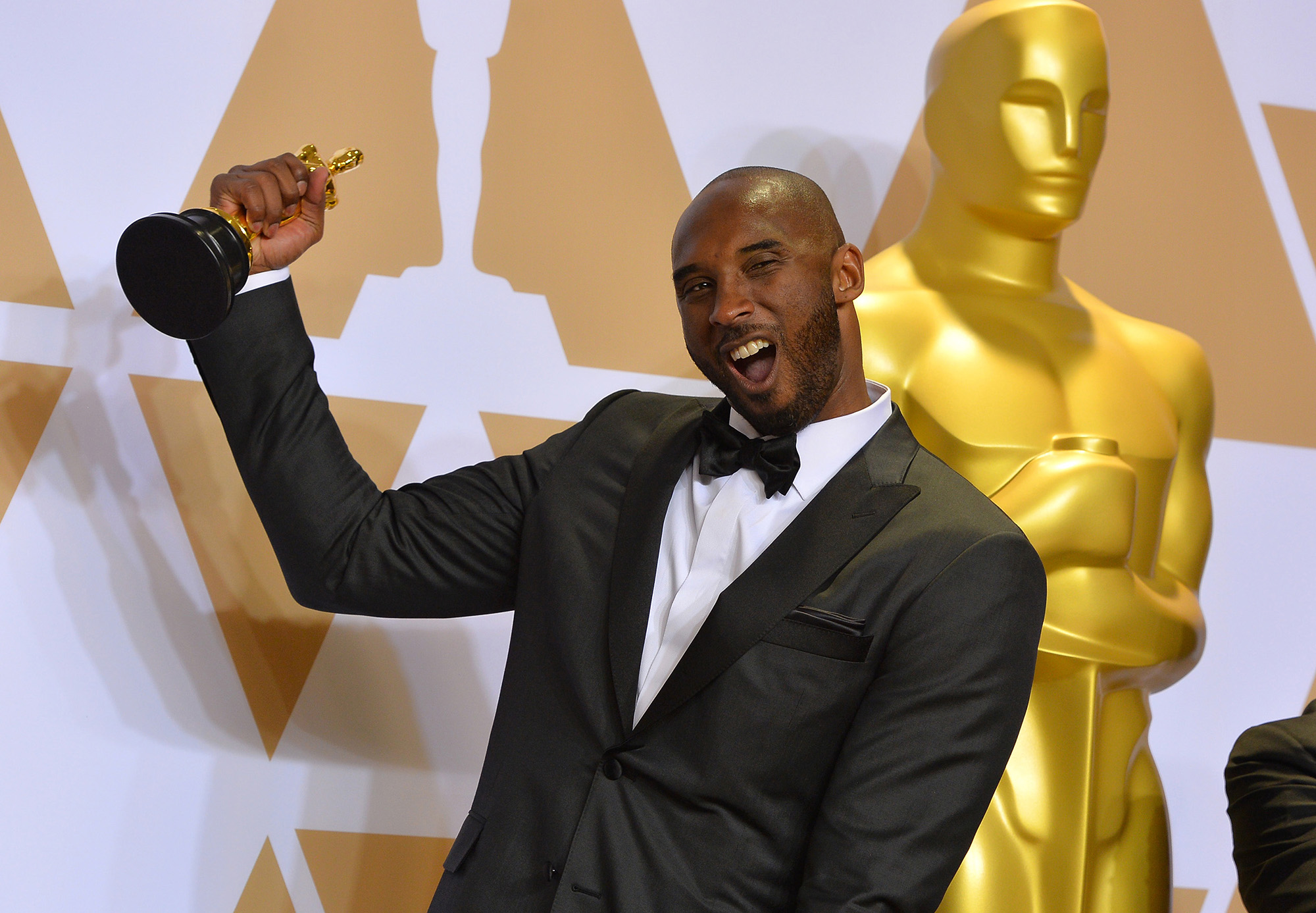 While people are remembering Bryant’s life in recent days in a positive light, both the good and bad from his past must be examined. The biggest black mark on his legacy is, of course, a 2003 incident in which a 19-year-old hotel employee accused Bryant, then 25, of sexual assault. The judge dismissed the criminal case for the incident because the accuser did not testify, but Bryant later settled a civil case with the accuser out of court. While Bryant admitted to engaging in sexual relations with his accuser, he did not think the incident was rape, as he instead believed the encounter was consentual. Bryant’s image was tarnished in the following years, but he took a step to change that by creating the nickname “Black Mamba” for himself after watching the movie Kill Bill. This nickname became a pillar of his identity, and helped create a new image for Bryant, who eventually managed to rehabilitate his image with the aid of time. Despite the terrible nature of the incident, it wouldn’t define the way he would be remembered by his fans, as Bryant made it a point to focus on rebuilding connections with the media, players, and fans alike.

After Bryant’s death, tributes poured in. O’Neal wrote on Instagram, “There are no words to express the pain I’m going through now,” while LeBron James wrote, “I’m heartbroken and devastated my brother!! … I promise you I’ll continue your legacy man!” Kyrie Irving, who considered Bryant his biggest mentor, and Chris Paul, an Olympic teammate and close friend of Kobe’s, sat out games after Bryant’s death to mourn. During games on Sunday and Monday, teams took 24 second shot clock violations and 8 second backcourt violations to pay tribute to Bryant, who wore numbers 24 and eight during his career. On Sunday, just hours after the helicopter crash, Dallas Mavericks owner Mark Cuban announced that no player would wear Bryant’s 24 for the team again. Additionally, Spencer Dinwiddie, Jahlil Okafor, Maurice Harkless, and Terrance Ross, all of whom previously wore number 8, decided to change numbers in honor of Kobe. 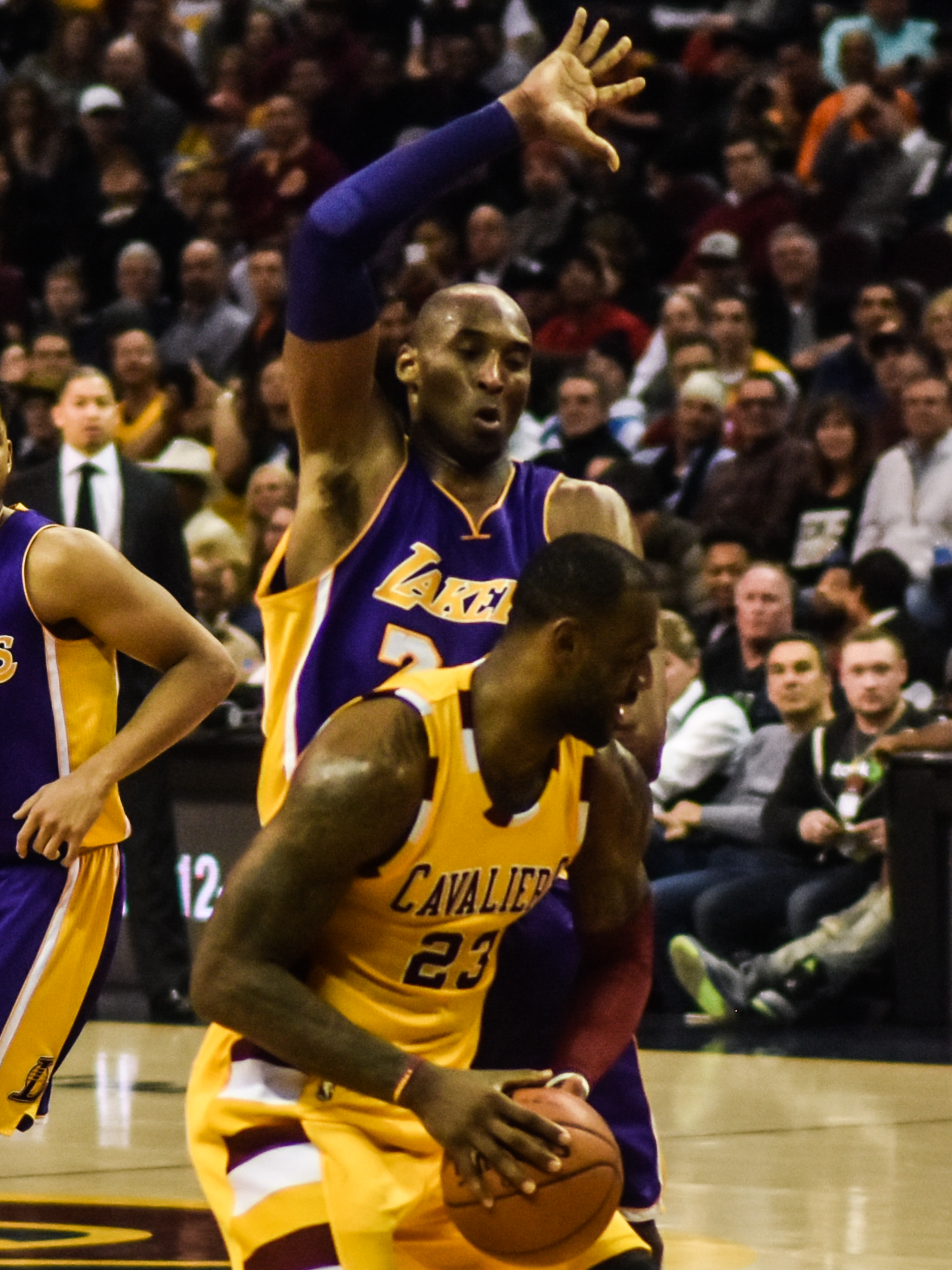 Bryant guards LeBron James in a game against the Cleveland Cavaliers. (Wikimedia Commons)

On Monday, the NBA decided to postpone the game between the Lakers and the Clippers, which was set for Tuesday, in order to give the Lakers organization time to process the loss of a franchise legend. The next game for the Lakers, which took place on Friday, featured numerous tributes and remembrances of Bryant. 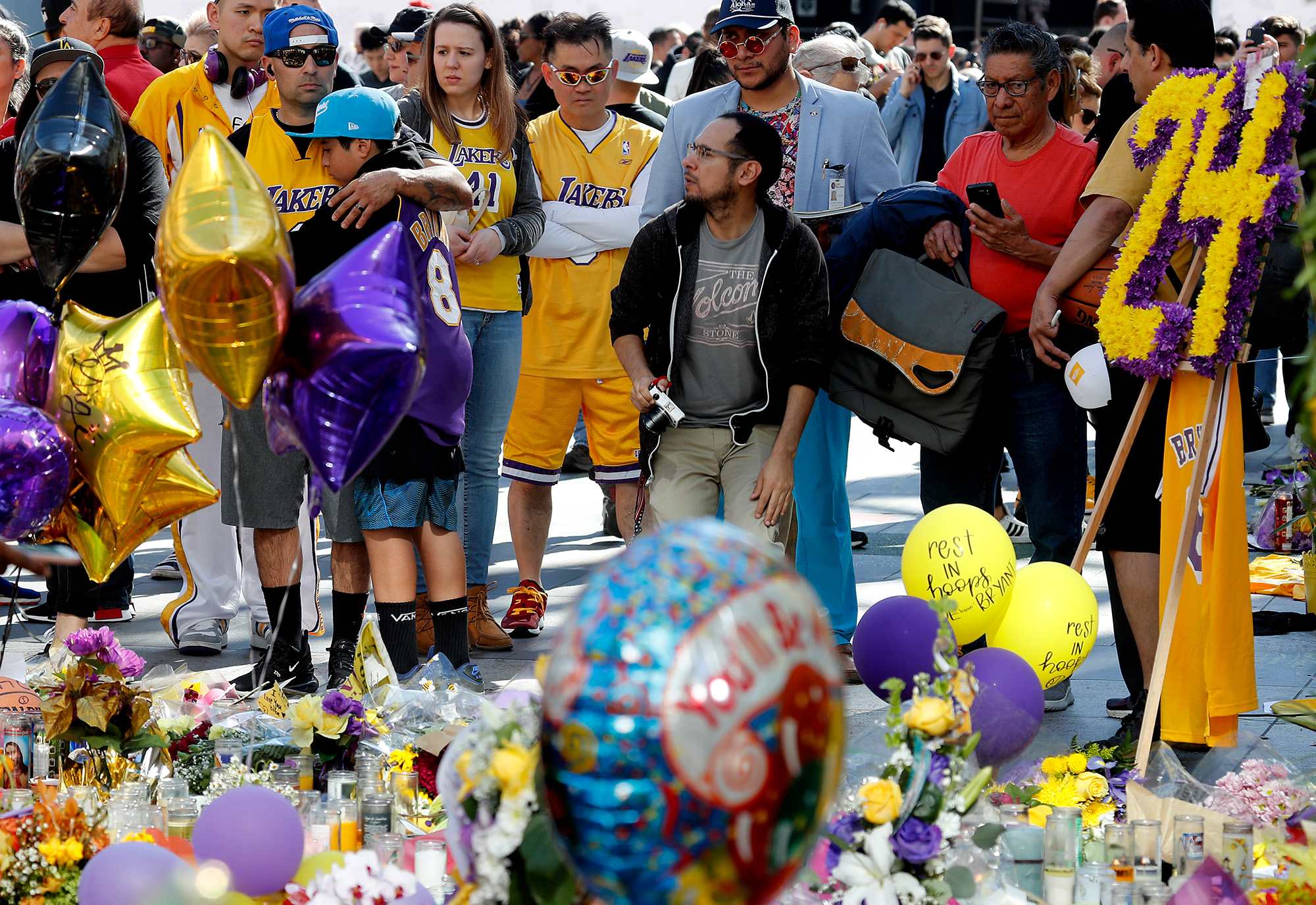 A makeshift memorial to Kobe Bryant, fed by a steady stream of fans, continues to grow outside Staples Center on Tuesday, Jan. 28, 2020. (Luis Sinco/Los Angeles Times/TNS)