With the school year coming to a close, the Senior Talent Show is an opportunity for members of the graduating class to have one last hurrah before they head off to college. With 24 individual acts and 33 performers, the acts ranged from contemporary dance duets to an epic harmonica solo. Seniors Olivia Fox, Thomas Petroff, Ryan Shaw, Tatum Jenkins, Eden Gibson, Andy Braham, and Shaba Jafroodi MC’ed the show. In between the acts, the MCs kept the audience entertained with ruthless teacher roasts, outrageous dance numbers, and much more. 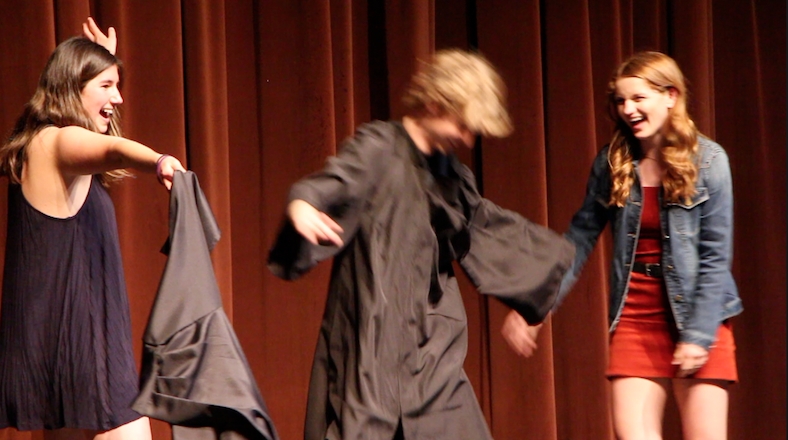 Alt-rock band Hometown & Young kicked off the show with their original song Sydney & I. Lead vocalist Erik Johnstone and drummer Victor Cassizzi performed alongside bassist Ian Moore, who became the first ever freshman to perform at a Senior Talent Show. The talented trio had the audience whooping and cheering at the top of their lungs after their unforgettable performance. After the band, Elisabeth Chang wowed the audience with her cello skills, performing Piatti’s Caprice #12. 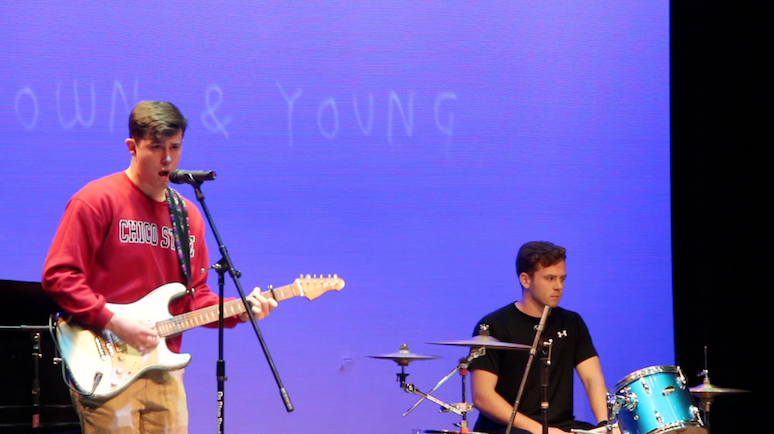 Renee Kim and Natalie Deck performed a haunting rendition of ‘Jealous’ by Labrinth. Their perfect harmonies rang throughout the theatre, and had several audience members on their feet by the end of the song. Emma Gerson followed the moving performance, singing her original song, ‘Ready for a Change.’ A highly accomplished performer and vocalist, Gerson’s talent was unparalleled. After Gerson, Sam Louie and Jesse Lu covered thank u, next with their own creative twist on the hit song. Their impressive combination of beatboxing, rapping, and singing instantly made them a crowd favorite. After the duo, Miranda Aochi and Katherine Zhao had the crowd on the edge of their seats with their spectacular contemporary dance performances.

Emma Gerson wows the crowd with her amazing voice.

Katarina Kelly performed a soulful cover of Carole King’s I Feel the Earth Move. Dancing across the stage while effortlessly belting out notes, Kelly stole the show with her incredible stage presence. Another crowd favorite, Grace Ponkey covered Adele’s I Found a Boy, and received a standing ovation from several audience members. Next, Tessa Citron-Pousty became the only non-musical act of the night, with an incredible delivery of her original monologue, The Hero and the Knight. 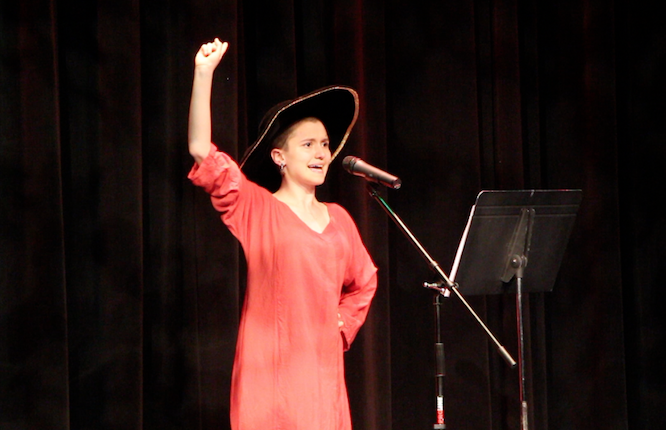 Tessa CP has the audience in stitches with her original monologue.

Talent show veteran Eesha Gadhia performed her original song Just Chillin, and made a second appearance in the second act, performing alongside Sophia Constantino, Katarina Kelly, and MC Tatum Jenkins in a heartwarming cover of A Soft Place To Land from the broadway musical Waitress.

Jerry Zhao closed the first act with an epic piano cover of The Epilogue from La La Land. While Zhao pounded away at the keys, the final scene from the movie was being projected behind him. The performance was executed perfectly and, even after Zhao had bowed and exited the stage, cheers from the audience continued to roar across the theatre. He returned later on in the show, accompanying Caitlyn Yee on her cover of Robyn’s Dancing On My Own.

Devon Shreiner performed twice throughout the night — once with her close friend and long-time talent show duet partner Gabrielle Pollock, as well as alongside her twin sister Jade Shreiner.

Senior class president Lauren Miller and Amanda Jones were the third and final dance act of the night. The two were perfectly in-synch, and recieved many well-deserved cheers from the audience. After the duet, Alyssa Walkup covered I’m Yours by Jason Mraz. Never missing a note, Walkup had a perfect performance.

Avi Patel wowed the audience with his unbelievable electric guitar skills in a cover of YZZ, and Maya Haylock played the acoustic guitar while singing Whitesnake’s ‘Here I Go Again.’ Next, Alissa Fullerton performed an emotional cover of Adele’s All I Ask. Across the theatre, you could spot audience members wiping away tears. Seasoned performers and LGHS theatre students Harrison Kerst and Hope Beckmann were also amoung the talented lineup. “It’s so crazy that this was my last time performing on this stage” Beckmann commented, “It was such an emotional experience for all of us, and I’m really going to miss being here.” 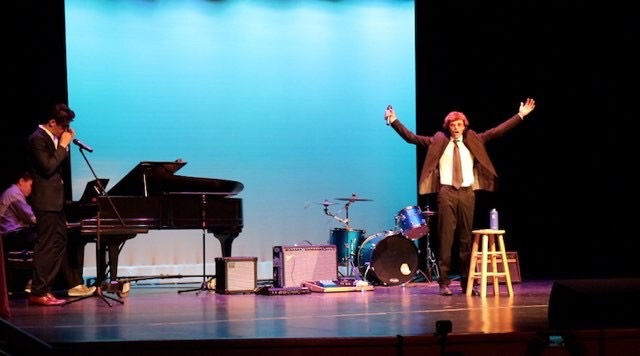 Finally, Hunter Marshall, Aidan Rhind, and Ittai Shaked closed the show with an epic cover of Billy Joel’s Piano Man. A month earlier, the three decided that they’d wanted to try out for the talent show. Although none of them had any real experience performing in front of a crowd, they dedicated several hours of practice to putting their performance together. Shaked even went as far as to teach himself the harmonica. When the time finally came for them to perform their act, it was better than anyone could have imagined, with Marshall fearlessly belting out every line. By the time he’d reached the first chorus, the entire crowd was singing along. “It’s such a nice feeling to see that all of our hard work paid off,” he commented.

The showcase demonstrated just how many outgoing and talented students will be graduating this year. For the past four years, these performers have inspired countless other students with their bravery and hard work. It will certainly be sad to see them go. 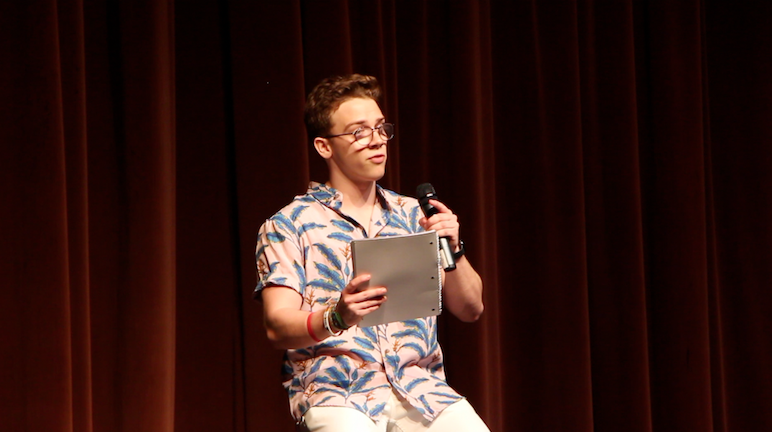 MC Ryan Shaw reads a hilarious poem in between acts. 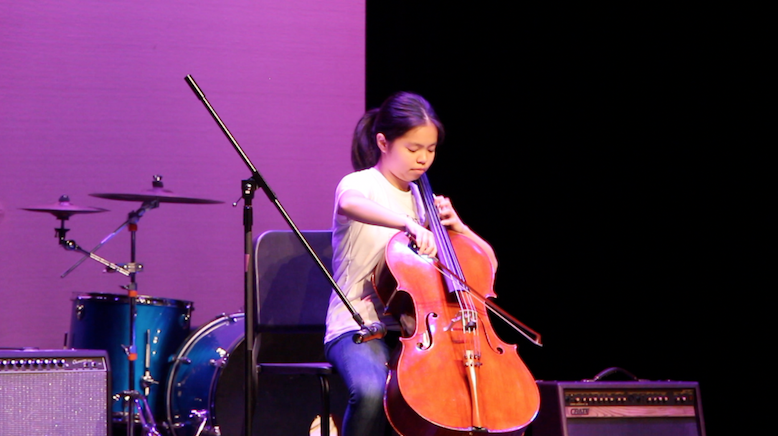 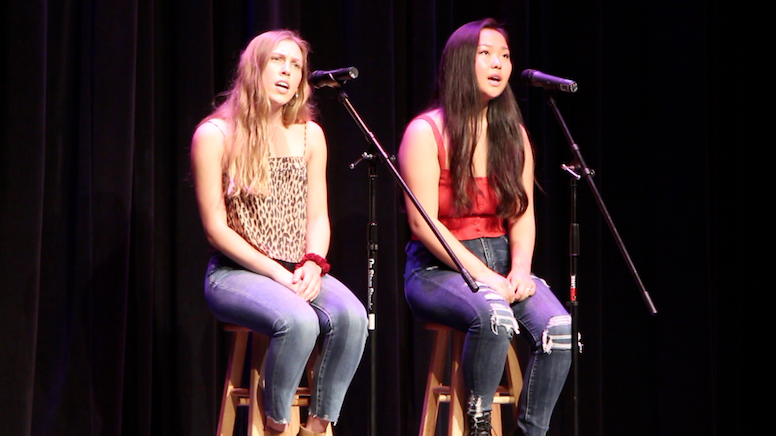