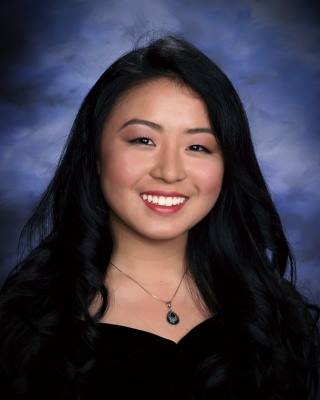 When I asked senior Sarah Ma how she would introduce herself to someone new, she replied, “If I were talking to someone I think I could possibly scare away, I’d say that I like the smell of grapefruit and bike rides on misty mornings.” She followed up with two other scenarios depending on whom she was meeting. This is just one example of how Ma takes everything to the next level. Ma’s unique experiences as an 18 year old range from adventures climbing mountain peaks internationally to finding herself alone in Berkeley overnight. Her experiences inspire her creative vision as a unique artist who explores many mediums including drawing, painting, photography, and more.

Ma’s father left to return to China to start his own company when she was in fifth grade. “Ever since, my mom has left me to spend summers alone or with a relative in several different places,” commented Ma. Ma says that this alone time gave her unexpected experiences and freedom, resulting in a lot of time spent making art, reading, and exercising. On one such “unexpected experience” her hostel room for a writing course in Berkeley accidently got booked for a couple of bartenders from Arizona. One of the bartenders turned out to be a fire-dancer, so “at around midnight, a couple of us at the hostel went outside and watched her light two sides of the torch and spin it, toss it, and dance with it,” Ma explained. Ma ended up rooming with a half-blind woman and her service dog.

Ma is well-known for her talent as an artist. “I became obsessed with Van Gogh in eighth grade,” she said. “I literally fell asleep with a illustrated version of his letters every night for at least a couple months.” Ma’s artistic exploration began with pencil and pen. “I loved imagining feeling the surface of whatever I was drawing as I put strokes down on paper,” she commented. Ma then moved on to expression through painting, which gave her “ultimate flexibility in expression – color, thickness, texture, and value.” Ma then goes on to describe charcoal as “beautifully unpredictable.” She uses charcoal to “capture emotion, because it can wield such a dynamic range of values.” Her current inspiration is artist and publisher Paul Chan. “He creates and publishes work that points out contemporary phenomenons in ways that feel extremely relevant yet entirely new at the same time,” she explains. “He very much embodies the idea that art is not meant to be understood, which is difficult for me to take in because trying to understand something has always been my first reaction.”

Ma’s feats also reach heights as she has climbed the highest point in Africa, Mt. Kilimanjaro, and the highest point in Mexico, El Pico de Orizaba. Ma remembers being tied to ropes so “guides could save us if we fell” and using crampons and ice axes to stay firmly grounded. “Visualization really helped me,” Ma said. “I remember just replaying happy moments in my life, thinking about my grandma’s voice and smile, and imagining some inner energy, not derived from food or sleep, but from my will for it to exist, and feeling it spread throughout my body. It was surreal, I was definitely not 100 percent conscious on the way up.” Ma did not voluntarily sign up for these incredible treks; however, she found a life lesson in her mother’s choice of challenge. “I tend to examine a situation and evaluate whether its possible or not before even giving it a try,” she stated. “From actually summitting these peaks, I learned that it’s valuable to just suspend judgement, to give yourself no option but to just do it and make it work. No excuses.”

“A bridge structure that falls short of its specific function.”

Ma applied to top schools across the country and among her acceptances were Columbia University and The Cooper Union School of Art, both in New York City. Ma is proud of her work for the take home art test to apply to The Cooper Union School of Art. Ma had a week to complete several assignments with different medias. One of the assignments was “Three objects on a walk documenting a proposed relationship through composition.” Another was “A bridge structure that falls short of its specific function.” Ma posted her work on her behance page, where you can also view some of her other pieces ranging across different mediums.